A pioneering centre with more than

surgeries a year at the IMO

Incision of less than

When is it performed?

There are many ocular diseases that require vitrectomy, mainly retina related:

What tests are necessary before surgery? 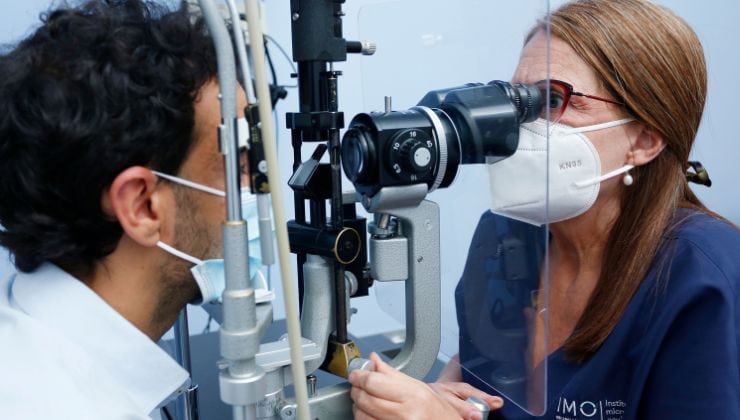 Before the procedure, a detailed eye examination, and often an ultrasound, is performed to determine the condition of the eye tissue. Other tests include:

How is it performed?

Vitrectomy is the removal of the clear gel (vitreous) from the eye. The procedure is carried out with delicate instruments that are inserted into the eyeball through small incisions in its outer wall (sclera). Some of the instruments used include: a fibre optic light to illuminate the retina, an irrigation cannula to maintain intraocular pressure and an instrument that cuts and removes the vitreous. Also used are scissors, forceps and numerous other instruments selected for each operation. During surgery, the eye may receive an injection of gas or a gas and air mixture to repair a retinal detachment, close a macular hole or correct other defects. The procedure is performed under local anaesthesia and lasts one to two hours, depending on the condition of the eye. Occasionally, the ophthalmologist has to repair other tissue and perform other parallel procedures, such as removing a cataract or carrying out a corneal transplant.

Following surgery, the occlusion patch is usually removed after a few hours. The patient may have some pain in the eye, which should only be treated with eye drops and ointment to relieve the symptoms and intraocular inflammation. In general, postoperative patients can lead a normal life, except in cases where gas has been inserted into the eye during surgery. The gas is slowly absorbed by the eye over a period of time that may last several weeks depending on the type of gas used. When the eye is filled with gas, vision is very poor. As the gas is absorbed, various uncomfortable visual effects are produced, which eventually disappear completely. While the gas is dissolving, the patient should not fly or travel up to altitudes of 800-1000 metres rapidly. If this is unavoidable, it is advisable to consult with the ophthalmologist.

The risks of vitrectomy are by far outweighed by the benefits of improved vision after surgery. Some of the potential risks are postoperative bleeding, retinal detachment, increased ocular pressure after surgery, cataracts and infection. Can a patient do sport or exercise physically after vitrectomy?

Yes, after any eye operation, although it is advisable to wait several days for the scars to heal. It normally takes ten to twelve days to return to a normal life. It is always best to consult the doctor to find out about the risk factors.

What are the symptoms of a detached retina and should it be treated as an emergency?

The symptoms of a detached retina are the presence of flashes of light (photopsia) or objects floating in the vitreous humour and, occasionally, a progressive shadow and loss of vision. It is important to contact your ophthalmologist as quickly as possible. It is not an emergency, but it needs to be operated on as soon as possible by a surgeon.

What are the symptoms of an infection inside the eye and should it be treated as an emergency?

If a patient who has been operated on for cataracts or other intraocular processes suffers a severe loss of vision with noticeable eye redness and pain, he or she must go and see an ophthalmologist urgently and without delay, as the emergency could threaten the vision of the eye.

What should a post-operative vitrectomy patient not do?

In general, the patient can lead a normal life, unless there is gas inside the eye, in which case the patient should heed the advice of his doctor. Flying above 600–800 m and travelling over high mountain passes, either by train or car, should be avoided. If such needs arise, the ophthalmologist should be consulted.

Is it normal for a diabetic patient to suffer from bloodshot eyes after surgery?

It is much more likely for haemorrhages to occur after surgery, especially if a vitrectomy has been performed, in the case of patients with diabetic retinopathy. This is due to the vessel walls being extremely fragile in these patients and more prone to bleeding.

What position should a patient with intraocular gas keep his head in?

The head should normally be tilted forward so that the gas does not contact the front of the eye, but the surface of the back of the eye. The length of time that the head should be kept in this position depends on the quantity of gas given.

What position should a post-operative retina patient sleep in?

If a patient with age-related macular degeneration (AMD) sees wavy lines, should it be treated as an emergency?

Yes, it is an emergency, but relatively speaking, as it is possible to wait 3 or 4 days. It is necessary to examine the eye, because the symptom could indicate the onset of decompensation, which can cause severe loss of vision. This distortion is sometimes not due to decompensation, but it always needs to be confirmed.

When are patients with intraocular gas able to fly?

When they have very little gas, i.e. one fifth or less in the eyeball, they can travel by air without a problem. If, however, they have a larger amount, they cannot fly, because the change in air pressure makes the gas bubble expand, which can cause ocular hypertension and damage the optic nerve.