Francesc Marquès Taltavull was unexpectedly kicked by one of his horses in April 2003. Marquès, the owner of the Menorcan Equestrian School in Ciutadella, depended on his horses for his livelihood. 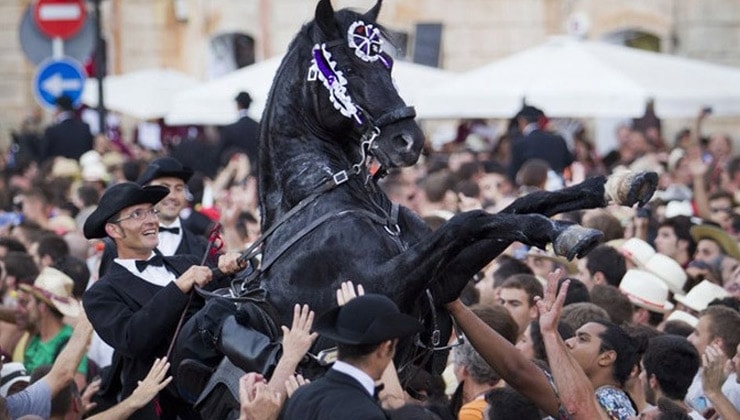 Although seriously hurt, he was actually very lucky, because, as he explains, “if I had been kicked half a centimetre higher in the forehead, I could have been killed.” Marquès lost the sight in his eye immediately. He was admitted to hospital in Palma de Mallorca and, there, he was given a fortnight to make a huge decision: whether he would agree to having his eye removed and a glass eye implanted. When everything seemed lost, someone suggested that he get a second opinion from IMO. Marquès jumped at the chance to visit IMO in Barcelona, where Dr Carlos Mateo urged him to undergo surgery to save the sight in that eye. Within a week, he was in the operating theatre. His retina had dislodged and retracted, but the doctor managed to reposition it, and the patient was able to leave IMO with sight in that eye. A year and a half later, a second operation was performed: a corneal transplant was carried out by Dr José Luis Güell, also with a satisfactory result. Today, the patient has an acceptable degree of sight, but still suffers from blurred vision, for which he is awaiting a possible third operation: the implantation of an ocular lens. In the accident, the lens was severely damaged and had to be removed. A new lens will solve this problem, but in order for the implantation to be viable, his eye needs to recover its pressure, which can only occur naturally. Whether this occurs or not, Marquès is still very grateful to IMO and, especially, to Doctors Mateo and Güell for saving his eye, which, according to the first diagnosis, seemed destined to be lost. Consequently, Francesc Marquès has been able to lead a normal life of training horses for Menorcan dressage, performing at equestrian shows and teaching people to ride. He has no hard feelings towards Kaley, now a 15-year-old and still one of his 40 horses, and there has been no repeat of the uncharacteristic behaviour that occurred in April 2003. Incidentally, in the days following the accident, the animal did behave in a peculiar manner: “It was a strange reaction; it would cower in a corner and not look up. It seemed that the horse was full of remorse for what it had done and fearful of a reprimand, which never came.” Marquès immediately resumed his job without any fear. “I suppose what happened to me was similar to bullfighters, who, despite getting gored, continue to fight bulls without any fear.” Francesc Marquès has been devoted to horses since childhood. It is a family tradition that goes back to his grandfather, was continued by his father and now has the involvement of his children. The whole family is devoted to the Menorcan Equestrian School, the only one in Ciutadella and one of the three on the island. Menorcan dressage has become a tradition during the island’s popular local festivals. Menorcan horses (indigenous to the island) perform a style of dressage that is different to classic or cowboy styles. Menorcan dressage involves distinctive movements, such as the inverted pirouette and the Spanish walk, when the horse walks on its two hind legs.