Dr José García-Arumí successfully performs a delicate vitrectomy on Elisabeth Barrios, a woman from Malaga who asked for help to pay for the operation on a TV programme.

On Wednesday, 14 November, Dr José García-Arumí, a retina specialist at IMO, carried out the vitrectomy on Elisabeth Barrios, a 32-year-old patient from Malaga with deteriorated vision in her left eye due to diabetes, which a few months earlier had claimed all of the vision in her right eye. The operation was long and delicate because Elisabeth was suffering from proliferative diabetic retinopathy with tractional and rhegmatogenous retinal detachment . As a consequence, tissue had formed on the retina which affected the macula and therefore her fine-detail vision. According to Dr José García-Arumí, “although it was a long and complicated operation, everything went satisfactorily and, hopefully, in the coming months, Elisabeth will recover her vision to the extent that she will be able to stand on her own two feet and live a normal life.” On the same day of the operation, Elisabeth confirmed that her vision had improved as a result of the disappearance of shadows that previously interfered with her vision. It will, however, be a long process, as silicone oil was placed in her eye during surgery and Elisabeth will not be able to completely assess the state of her vision until it is removed in a few weeks’ time. It is also possible that she may require cataract surgery at a later date. The surgeon will determine this based on the follow-up that will take place in the coming months.   Elisabeth was accompanied throughout by her two brothers. On Thursday, following an examination 24 hours after the operation, she left the clinic with a smile on her face and the hope of starting a new life with her daughter, who, in recent months, has been a great support, despite only being 10 years old. Elisabeth’s operation was made possible by donations from many people who were touched by her story on the Canal Sur television programme “Tiene arreglo” (It’s fixable), which she appeared on a few weeks ago to appeal for funds to pay for the trip and the operation. IMO also wanted to play its part, making up the shortfall of costs not covered by donations from individuals and committing itself to the patient’s follow-up after the operation.

Her case is a clear example of how important it is for diabetic patients to closely monitor their vision. Within a very short time, about a month, Elisabeth’s vision loss became significant. If, despite taking all of the necessary precautions, a patient’s diabetes starts to affect vision, early diagnosis and treatment are vital to prevent the significant vision loss experienced by Elisabeth. 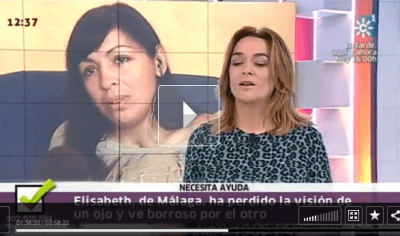