Losing the ability to perceive details because of a macular hole is not an easy process to take and therefore confidence in the specialists of the IMO was key to Blanca, who emphasizes that investing in health is investing quality of life. 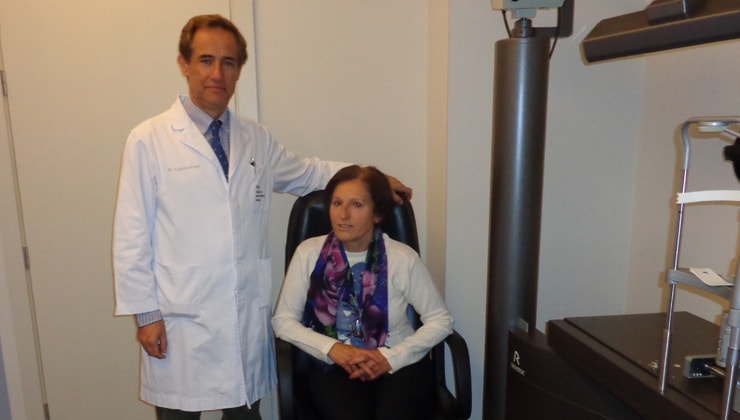 The Riojan Blanca Estrella Blanco walked through the IMO’s doors for the first time in 1999 to ask for a second opinion on a macular hole, recommended by her eye reference centre. After the initial consultation with Dr José García-Arumí, she decided to receive treatment at the Institute. But, what was it that convinced Blanca? What convinced her to put herself in the hands of IMO’s specialists? She explained: “From the first moment, they instilled confidence in me, which is essential in such a complex psychological and emotional situation.” With a disease like a macular hole, which causes gradual loss of detailed vision, it is not an easy process and usually generates lots of doubts. Thus, Blanca mentioned “the natural treatment from the doctor and their team, who cared for me and encouraged me to cope.” So IMO’s patient mentioned that the ease with which she was treated gave her great confidence and the strength to continue.

In fact, Dr García-Arumí, a retina specialist at the Institute, has performed over 1,000 macular hole procedures since 1992, the year in which IMO began to apply new surgical techniques for the treatment of the disease pioneeringly in Europe. According to the ophthalmologist, “we have made significant progress since then, and the results are getting better and better, with the macular hole closure rate greater than 90%.” A clear example of this is that of Blanca herself, who has seen a significant improvement in her quality of life since the operation.

However, the road to this point was not easy, and she continued to experience ups and downs, since, after a few years, Blanca suffered a retina detachment in her other eye, her left eye, the eye in which she suffered from this disease previously. The patient returned to see her trusted ophthalmologist, Dr García-Arumí, with a very satisfactory outcome. After the operations, Blanca did not need glasses and achieved a greater degree of visual acuity than before, although she cannot read or spend much time in front of a computer: “I get tired easily, and letters and numbers seem to dance on the page,” adding that “this is relatively insignificant, since I am able to compensate for this with other interests, such as listening to the radio, watching the television or going to exhibitions.”

This constructive and positive attitude, not getting carried away with defeatism, is one that has characterised Blanca’s self-improvement, whose experience shows her that there is no light without dark. Therefore, she confessed to us that thanks to this experience she has learned to appreciate what is truly important, health, because “investing in my health is investing in my own quality of life and that of those around me.”