It was a vision problem that forced him to hang up his racket and brought him to the IMO. Since then, the player and the IMO have had a close relationship based on mutual appreciation.

Now, it is others who are wielding the racket, which Corretja did for over 20 years on tennis courts around the world, always with his trademark butter-wouldn’t-melt-in-his-mouth look and showing himself to be, in spite of his sporting achievements, a simple, friendly and normal sort of chap. A setback that was not tennis-related forced his retirement in 2006, but today he does not feel bitter when recalling that moment: “Maybe it was time to try something new.” It was a vision problem that forced him to hang up his racket and brought him to IMO. Since then, the player and IMO have had a close relationship based on mutual appreciation. For a few minutes, Álex Corretja shares with us some reflections on his career, his personal experiences and the world of tennis, which, he says, is largely made up of “decent people.” It is much to his credit that he thinks of his fellow competitors in such glowing terms.

How are you enjoying your new job as captain of the Spanish Davis Cup team?

It is great! It is come at a good time for me professionally and personally and fits in very well with my goals and future hopes. Also, the fact that I have been away from the tennis circuit for a while gives me a much broader outlook, which, I believe, can contribute positively to the job I have been given. I am delighted, but it all happened very quickly. I was offered the job on 20 December last year, it was officially announced on the 27th and, in January, I was at the Australian Open speaking to players and finding out who was available.

Can you understand why Nadal, Ferrer and Verdasco do not want to play in the Davis Cup?

Yes, I can understand. The schedule is demanding, there are many tournaments and everyone has his own priorities and personal goals. They have won the Davis Cup three times in recent years, and that makes the Olympics a priority, because they only come around every four years. I have to respect their decisions.

Without them, though, it is going to be more difficult to win the competition, is it not?

I cannot think like that. Obviously, losing players that are at number 1 or in the top five in the world is not ideal, but, luckily, Spain has other players who could do very well, you never know. So far, we have had a good start in Oviedo. 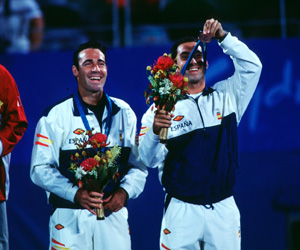 In recent years, you have been working with Andy Murray. How did you enjoy your role as a coach?

It was an excellent experience. But I was more an advisor than a coach, as I was not working full time with Murray, because he lives in London and is based in Miami. It meant a lot of travelling, and it got complicated. But, anyway, I learned a lot with him, and it was a very good and enriching experience. Working with a player as good as him gives you a lot. I also became quite close with him and his team, and we had some great times.

Did you get on as well with your coaches when you were a player?

I was very lucky with my coaches. They always understood me very well and, above all, were people I trusted, which helped me feel very at ease.

What was your best professional moment?

When I won the Masters in 1998. It was the culmination of many years of work, and I remember it as a time when I felt most fulfilled as a tennis player. After a lifetime of pursuing a goal, I finally managed to achieve something. I felt like a dream had come true. Other special moments include winning the Davis Cup in 2000, because Spain had never won it before, and we showed we were capable of doing it, and the success at the Sydney Olympics with Albert Costa, because not everyone can say they have won an Olympic medal!

And the worst moment?

Losing my second French Open final. I had worked very hard and had great hopes; I thought I could win it. I felt I was quite close to winning, but it got away from me. At the time, I was very disappointed, but, gradually, felt relaxed about what I had achieved; I had done my best.

And the most emotional moment?

The opening ceremony of the Sydney Olympics in 2000 was one of the most emotional moments of my life. It was a wonderful feeling to participate in something I had seen so many times on TV. The thought that I had been part of Olympic history. And then we won the bronze medal, which made me even happier. When you experience these moments, you enjoy them, but, as time passes, you appreciate even more how difficult they were to achieve.

And the best thing that has happened to you away from the tennis courts?

My two daughters, who are 6 and 8. They fill me with a lot of happiness. I have even turned down professional projects to spend more time with them. I want to devote as much time as possible to them. That is why I am happy as captain of the Spanish Davis Cup team: It is a nice job, which also gives me time to be with my girls. If it had involved taking up all of my day, I would not have accepted the job.

Why did you become a tennis player?

Did you not have a plan B?

No, I only wanted one thing: to be a tennis player. As a child, I was Spanish champion in all categories and then world champion when I was 16, which was when I decided to focus completely on tennis, despite getting good grades at school.

What does tennis teach you?

A great deal! Everything! Tennis teaches everything you can imagine: tolerance, patience, perseverance. It teaches you how to win and lose, to respect, to be patient, to be ambitious, to set yourself short- and long-term goals. Regardless of your ranking, it teaches you a wide range of things. It also helps in many aspects of your personal life. It helps a great deal!

A problem with your left eye forced you to retire from tennis, did it not?

Yes, in 2006. I was training one day and suddenly started to have problems seeing; I had trouble judging distance with the ball and had blurred vision. Luckily, someone recommended that I go to IMO. I saw Dr Borja Corcóstegui, and he passed me over to Dr Carlos Mateo, a macula specialist. I was very lucky to meet this doctor, because, as well as being a wonderful doctor, he also comes from a tennis background, as he is the son of Simón Mateo, who was the chief executive of Barcelona Royal Tennis Club and considered by many as an exemplary figure. When he told me he was his son, it gave me goosebumps!

What was the diagnosis?

From the outset, the doctor was very honest and explained everything clearly. He told me that I had suffered a macular haemorrhage and I would need an operation. From the beginning, I trusted him implicitly, because he obviously knew what he was talking about. I had a lot of confidence in him and felt very safe in his hands. He was honest and warned me that recovery would be slow and I would not get my sight back for a long time.

Was the prognosis correct?

I had the operation six years ago. A lot of time has passed, and I have recovered a lot of vision: I can lead a normal life and even play tennis again. For me, it was a great stroke of luck finding IMO, which is only ten minutes away from my home. They have treated me very well and enabled me to recover a lot of my vision. Recent tests have shown that my sight is good, over 70%, which is amazing considering that I had practically no vision in my left eye.