One of the research projects on which the IMO Foundation is currently working is producing its first results, allowing the identification of 3 novel pathogenic variants causing cone-rod dystrophy, one the most severe inherited retinal dystrophies, which affect both peripheral and central vision.

These new mutations are located in one of the genes most recently associated with this disease, DRAM2, in which only 10 different pathogenic mutations had been previously reported. With these results, “we have corroborated the relevance of this gene, among the group of more than 55 genes causing cone-rod dystrophy”, highlights Dr. Víctor Abad, principal investigator of this study, which has been published in the Experimental Eye Research journal.

In order to achieve these findings, more than a hundred patients have been analyzed at the IMO molecular biology laboratory, by using next generation sequencing methodologies, capable of increasing the number of simultaneously studied genes and improve the success rate in genetic diagnosis.

Novel mutations: from the laboratory to the clinic

But this project from Fundación IMO not only allowed the identification of novel mutations: “For the first time, we have established genotype-phenotype correlations for DRAM2, associating the information contained in the patient’s mutated gene with the clinical expression of the pathology”, explains Dr. Esther Pomares, coordinator of the Genetics Department at IMO.

IMO ophthalmologists have also contributed to the study and, due to the medical follow-up of the involved patients for years, common characteristics have been described for all the subjects with these DRAM2 variants. According to the investigators, “while many inherited retinal dystrophies start to develop during the adolescence, in our cases the cone-rod dystrophy presents a late onset (from the age of 30). Moreover, we reported an initial loss of central vision –which could be confused with other cone dystrophies, such as the Stargardt disease–, although there is also a reduction in the peripheral vision as the disease progresses”.

Additionally, some differences have been detected between the 3 families with the novel mutations. One of the variants seems to promote the production of an abnormal protein, toxic to the photoreceptor cells (cones and rods), which may lead to a more severe form of the disease, while the other two genetic changes are characterized by the decrease in the protein levels, with a consequent slower evolution of the pathology. 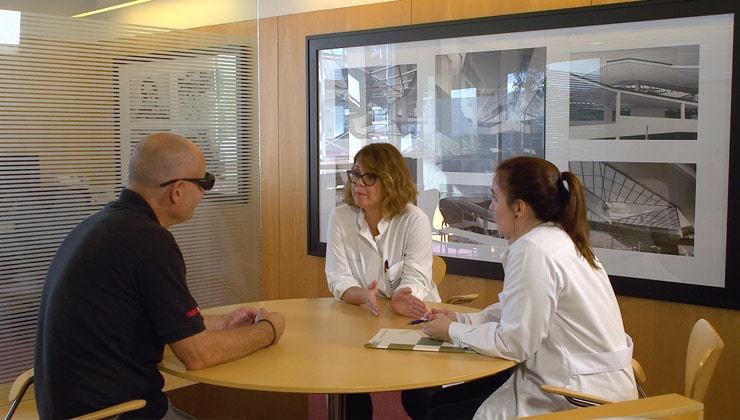 The joint work of ophthalmologists and geneticists, together with the collaboration of the patients and their families, plays a key role in the development of the Fundación IMO research projects.

Progress towards the retinal dystrophies

The vision loss caused by inherited retinal dystrophies is a challenge for both the ophthalmologic and scientific communities, as it is still untreatable and irreversible. However, a greater knowledge of the molecular basis of these ocular rare diseases may be the key to future treatments, such as gene therapy. In order to apply these therapies, we will firstly need to identify the familial genetic cause of the pathology and understand how the concrete change is altering the correct function of the photoreceptor cells, the main target on retinal degenerations.

For all this, the IMO Foundation has been promoting the investigation of the inherited ocular pathologies for over a decade and is currently developing 3 research projects in this field. Among them we find the “Identification of new retinal dystrophies genes and characterization of genotype-phenotype correlations”, which has resulted in the hereby reported findings on cone-rod dystrophies, as well as another previous great advance achieved last summer: the identification of a mutation causative of macular dystrophy in RP1, a gene only associated to retinitis pigmentosa at that moment.