“In the world, there are 45 million people with avoidable blindness.” An interview with Dr Borja Corcóstegui

Dr Borja Corcóstegui talked to El País about his 12-year collaboration with the NGO, Eyes of the World, whose mission is to prevent and combat preventable blindness in the world’s poorest countries 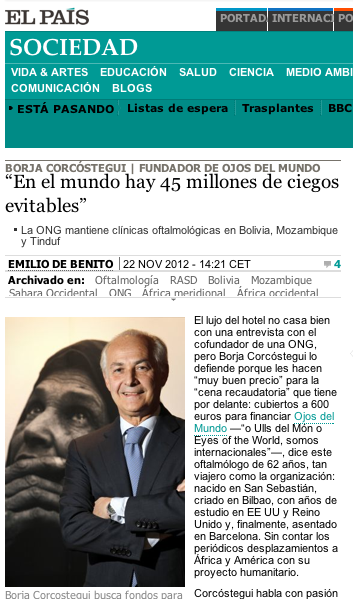 The luxury hotel setting seems incongruous for an interview with the founder of an NGO, but Borja Corcóstegui assures me that they negotiated “a very good price” for the “fundraising dinner” he will be attending later: 600 euros a head to raise funds for Eyes of the World — “or Ojos del Mundo or Ulls del Món, we’re international, you know” — says the 62-year-old ophthalmologist, who is as well travelled as the organisation itself: born in San Sebastian, raised in Bilbao, with years of study in the US and UK and, finally, settled in Barcelona.

Not counting his regular trips to Africa and South America with his humanitarian project. Borja Corcóstegui speaks passionately about a project that began, almost by accident, 12 years ago. “Rafael Ribó, the politician (currently the Catalonian Ombudsman), came in with a detached retina, had an operation and told me: “Being able to see clearly again is fantastic; we have to do something.” That enthusiasm led them to a Saharawi camp in Tindouf. “There were so many eye problems there that we set up the first mobile medical missions.” That particular model grew steadily, but today we focus more on training local professionals than sending doctors and other specialists from Spain.

“This has worked really well in Mozambique and Bolivia. When the Saharawis come though, they want to stay in Spain; they find it difficult to return home because of their precarious situation in the desert, but the others don’t have problems. In El Alto, the poorest place in Bolivia, we have an excellent clinic, which is even up to Western standards. If a thing is worth doing, it's worth doing well in a professional way,” he says.

Borja Corcóstegui wants to retire when he is still at the top of his game. During his first trips, Corcóstegui came face to face with a terrible reality. "In the world, there are 45 million people with avoidable blindness; people with cataracts who are full of gratitude when they can see again. It’s exciting, and even embarrassing, but you have to let them hug and kiss you. You have to let them show their appreciation. It's their way of expressing their joy and you can't be standoffish.” The ophthalmologist does not travel as much as he used to, but still enjoys it when he does. “Family is not a problem. My wife comes along and helps me. She’s a nurse by training, but went on to do other things. Even Ribó gets involved. When he comes, I put a white coat on him and get him to apply eye drops for glaucoma. The people call him doctor, although he isn’t one. Everyone who wants to do something can help,” he says.

His conviction that all you need to do to be useful is to set your mind to something leads him to give the assurance that, when he retires from IMO (Instituto de Microcirugía Ocular) in Barcelona, he wants to continue helping the NGO. “I’m not one of those who wants to carry on working until they drop dead. As the Italians say, it’s best to retire in beauty, when you’re still healthy. I wouldn’t want to hog my position,” he says. The sparkling water is an excuse for chat. Borja Corcóstegui barely has half an hour before a meeting and the dinner, which will be attended by the Health Minister, Ana Mato, and people who support the NGO, such as the Swiss who come every year to show their solidarity.

The project, which used to raise two million euros a year, is also suffering from the economic crisis, and, this year, has only managed to raise 1.4 million, so the philanthropists must be looked after. A meeting with them — to which he is going to arrive 10 minutes late — awaits him. “But the water did just the job,” he says as he says goodbye.